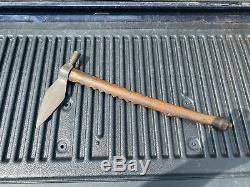 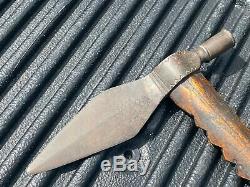 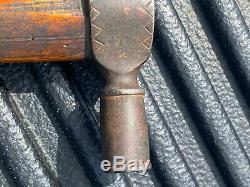 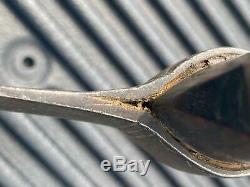 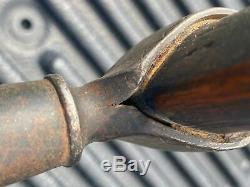 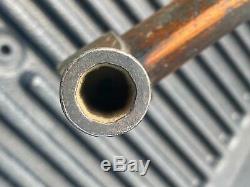 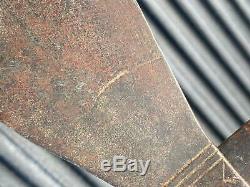 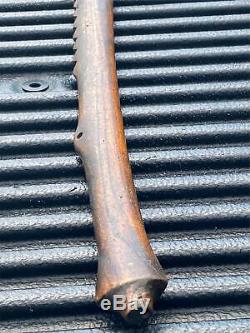 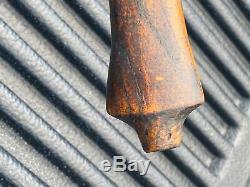 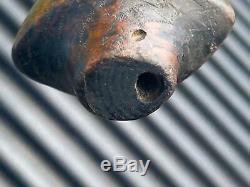 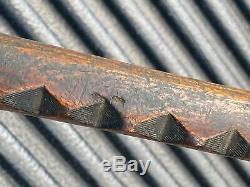 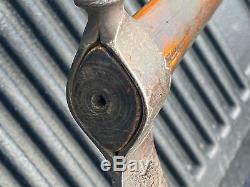 The tomahawk is one of the most iconic weapons of the American frontier. Showcased both in old Westerns and modern films like The Patriot and Last of the Mohicans, the tomahawk is both a versatile utility tool and a symbol of war. The Pipe-Ax or Pipe-Tomahawk was a unique item developed for the North American fur trade.

There was no European equivalent prior to its development in North America. Combining the symbols for both war and peace the pipe-tomahawk was a highly desirable trade item for Indian chiefs and warriors as well as for frontiersman and militia. The pipe-tomahawk was not only a trade item, but was a gift of great value and meaning to be given at treaties, councils and other governmental-Indian events.

Many of the pipe-axes made up to about 1800 continued to be functional chopping tools. As the trade moved west into the mid-continent prairies in the early half of the nineteenth century there was less need for cutting trees.

Lighter, less massive heads and longer hafts were better suited as a weapon of war to be used from horseback. The pipe-tomahawk was not merely a ceremonial item.

Through most of its 200 or so year history, it was also a terrible weapon when used in close combat. Marcus Whitman was killed with a pipe-tomahawk during an uprising of Indians at his mission in 1847.

The French, Dutch, and English traders provided iron Tomahawks to the Native Americans as trade items. The Native Americans originally had a small stone axe. By trading with the Europeans, they acquired axes, which were very heavy, weighing two to three pounds each.

As time went by, the Europeans learned to make steel Tomahawks to use as trade items, which gradually became lighter and smaller. These were more suitable for hunting and for war parties.

State militia soldiers serving during the Revolutionary War often carried a Tomahawk mostly instead of a sword. The Continental Congress of the United States in a resolution dated July 18, 1775, decreed that militiamen must provide themselves with a sword or Tomahawk in addition to muskets and bayonets. The patriot militia of Kings Mountain carried Tomahawks instead of swords. The Tomahawk was used for the last time in combat inside the United States at the Little Bighorn Battle between the Sioux and the 7th Calvary, on June 25, 1876. But the Tomahawk saw combat again in the Vietnam War where a shorter version called the LaGana Hawk saw action. It proved itself in battle again after almost 100 years. Not every trapper owned a pipe, Tobacco represented a small luxury in otherwise harsh conditions and was also a popular trade item with American Indians. Here is a list of the typical gear a mountain man or trapper would have with him. These were basically buffalo skin blankets. A saddle for riding and the bridle for his horse.

Hand-forged, iron ax heads were of great importance to Americans conquering the wilderness. Essential for felling trees to use as firewood and shelter, as well as a valuable weapon, this was a heavily traded item. A blacksmith would make a trade ax by taking a single, elongated flat plate of iron and hammering out one end while hot. He would then wrap the piece of iron around a pattern to form the eye of the ax for the wooden handle. The blade was then ground to sharpness.

For sale is a wonderful early pipe tomahawk. Hand forged head shows many seams and a nice seam across the blade. The original handle is doing well, a slight curve toward the mouthpiece from years of moisture changes. Spontoon style head, engraved on the shoulders.

The bowl retains an octagonal shape of the g u n barrel its was forged from. Remnants of a hide gasket can be seen between the head and the handle. Originates from late 18th century through the 1820's. 20 inches long in the handle and 10 1/2 inches long in the head. The item "Vintage 1790-1820 Mountain Man Plains Indian Pipe Tomahawk Forged Head Seams @@@" is in sale since Sunday, August 16, 2020. This item is in the category "Collectibles\Cultures & Ethnicities\Native American\ US\1800-1934\Weapons". The seller is "deweycheathamandhowwe" and is located in Bristol, Virginia. This item can be shipped worldwide.