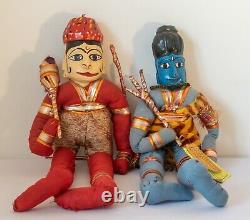 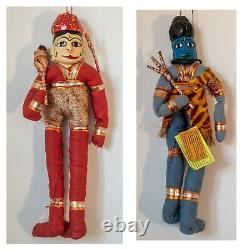 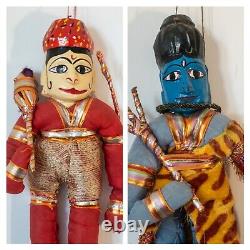 Kathputli is a string puppet theatre, native to Rajasthan, India, and is the most popular form of Indian puppetry. Being a string marionette, it is controlled by a single string that passes from the top of the puppet. Tribes of Rajasthan have been performing this art from the ancient times and it has become an eternal part of Rajasthani culture and tradition. No village fair, religious festival or social gathering in Rajasthan would be complete without Kathputli, with some scholars believing that the tradition is more than a 1000 years old, referenced in folk tales and songs.

This pair are made from cloth and wood and feature Shiva, one of the principal deities of Hinduism. This puppet shows the traditional dress of Rajasthan, India. It is made by a Performing Arts Group and its sale helps to fund their activities. It has been imported by a Recognised Fair Trade Company. Some distinctive characteristics of God Shiva are: (a) his seat and attire are tiger skin, (b) a number of cobras around his neck and shoulders, (c) his long matted hair tied in to a mop atop his head, (d) the trident he carries in his hand, (e) the sacred river Ganges falling upon his head and flowing by his side, (f) his body colour blue as a result of drinking the Demons poison thus saving the world form total distraction'.

This item is in the category "Antiques\Asian/Oriental Antiques\Indian". The seller is "facinte_0" and is located in this country: GB. This item can be shipped to United Kingdom.