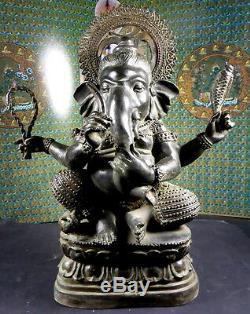 Ganesh: 15 inches tall x 13 inches wide. WEIGHT 5.7 kilos (12.6 lbs). At times, you can change your circumstances only by embracing the spiritual within you.

To heal someone, you must first know why people suffer. If through healing them, you can show them how to stop suffering, you have fulfilled your role as a physician. At the heart of all suffering there is a spiritual remedy that comes about from knowing the relationships between karma and suffering. Karma comes from the chaos that exists within all living creatures, all aspects of this world and the universe at large. Some chaos is good, some indifferent, some bad, but it is the stuff from which happiness and then enlightenment can be made.

A sacred blessed Ganesh statue will help to provide pure powered sacred positive energy for you and your family. At this moment in time there is a huge amount of unstable dark energy that is just floating around the world and a blessed and empowered sacred item will help to remove the bad energy and with your love and pure positive force will replace the bad with the good. A sacred statue as this Ganesh will help to open up a door in space and time and will help to channel positive universal sacred blessed pure energy towards you and your family. A statue such as this Ganesh will help you to destroy any negative vibrations or walls that may be preventing you from fulfilling what your true potential and goal in life is. Ganesha is revered as the son of the Universal parents Shiva and Parvati, and is always honored first in most worship services and rituals. Ganesha is also known as Ganapati, Vigneswara, Vinayaka, Gajamukha and Ainkaran. The huge size of Ganapati represents the Universe (Cosmos), and his curled trunk, the symbol OM. The elephant's head is said to represent superior intellect while the snake around his waist cosmic energy. His broken tusk is symbolic of knowledge, as it is believed that it is with this tusk that he wrote down the Mahabharata, in the capacity of a scribe, when it was recited by the sage Vyasa. The mouse - mooshikam, his mount is said to symbolize the equal importance of the biggest and smallest of creatures. Ganesha the elephant faced God is one of the most popularly worshipped forms of divinity - as a remover of obstacles and the embodiment of good luck.

Ganesha is regarded as the son of Shiva and Parvati (Shakti), the Universal parents, and the brother of Skanda. Legend has it that Parvati, created a beautiful boy from the dirt of her body, treated him as her son, and gave him the responsibility of guarding her home. Shiva, upon returning home was affronted by this lad, hitherto unknown to him. The lad, true to his word to his mother, refused to let Shiva into his own home.

An enraged Shiva sent his Bhuta Gana attendants to scare the lad and to obtain entry into his own home. The lad single handedly defeated the Bhuta Ganas in battle.

A clash of egos followed, as Shiva sent several of the Gods, to fight against Ganesha and an equally enraged Parvati sent several of her attendants to fight them. In the resultant fight, the lad's head was chopped off by Nandi deva, and the lad lay lifeless. Parvati's grief knew no bounds, and Shiva sought to assuage her, by promising to bring the boy to life. Alas, his head could not be found in the battlefield.

A quick fix was sought, and it was decided that the first available head would be used to bring the boy to life. Accordingly, the boy was fitted with the head of an elephant and brought back to life. Even this did not placate Parvati, who sought that this boy (who successfully created obstacles to his father's mission) now fitted with the head of an elephant, should be regarded by one and all, as the remover of obstacles, and should be offered worship first, before any form of worship was offered to any other manifestation of divinity. This was granted, Ganesha, the lord of the attendants of Parvati, came to be regarded as Vigneshwara the remover of obstacles. LOVE seeks no reward; LOVE is its own reward.

Glory to you, O Lord Ganesha! You bestow vision on the blind, chastened body on the leprous, Children on the sterile and wealth on the destitute. We pray to thee day and night, please bestow success upon us. Lord Ganesh is the elephant-headed God, who is known as Lord of Beginnings and the Lord of Obstacles. He is regarded as the son of Lord Shiva and Goddess Parvati.

The image of the Lord has four hands, elephant's head and a big belly. His charioteer is a tiny mouse, which shows a unique combination of wisdom, intelligence and presence of mind.

Lord Ganesh is worshipped before starting any new venture. In fact, his names and aarti are recited before starting any auspicious work, in order to achieve success in it. Origin It is said that Lord Ganapati originated from the mud of Goddess Partvati's Body. She placed Him at the entrance of the house, as the door-keeper, while she took a bath. It so happened that Lord Shiva came to visit the Goddess at that time and Ganesha did not allow him to enter the house.

Do you remember long ago that you had the ability of second sight, and other special abilities. You might never have revealed this to anyone as you felt slightly afraid and were not sure in yourself. Years later life takes its toll and you now think that these special abilities that you had years ago are now gone. These abilities NEVER GO, you still have the same abilities but you now have to clear a path to open your mind and be able to go back to your childhood and let your mind open up.

When you work with our Sacred Blessed items you will soon realise that these are SACRED SPECIAL TOOLS and will work for you in many different ways. They will open up a PURE POWER FLOW FOR YOU, and enable PURE POSITIVE ENERGY to enter your divine spirit. You to go back, far back in time to when you were a child. In those days you thought that. Nothing at all was impossible, you could do anything and everything.

In those days long ago your spirit had not been reduced by negativity you believed in pure and special magical powers and your mind was open to receive and discover and to understand the mysteries of life. Our sacred, rare, empowered and blessed items are being made available for the benefit of practitioners, like you, who would like to have holy objects as devotional support to your practice.

Rather, we are making them available with the express wish to benefit others. All funds in excess of our costs help us to continue our activities.

Sellers: Get your own map today. The item "OLD VINTAGE LARGE GANESH GANESHA BRONZE STATUE. 15 inches tall" is in sale since Tuesday, July 4, 2017.

This item is in the category "Antiques\Asian/Oriental Antiques\South-East Asian". The seller is "spiritual-sky" and is located in Bournemouth. This item can be shipped worldwide.